Whatever you believe, Sasquatch sightings can be fun, so Department 56 has designed and introduced a ceramic Sasquatch figure to have fun with in your Village – no matter what Village you collect.

Many collectors host parties and open houses inviting family, friends and fellow collectors to view their impressive Village displays. Hide the figure in clever places and invite your guests to find him. You could offer a “prize” for the person who finds Sasquatch first!

Whether you have a firm belief in the mythical creature we call “Big Foot”, or “Sasquatch” the legend has its origins in native culture that is hundreds of years old. 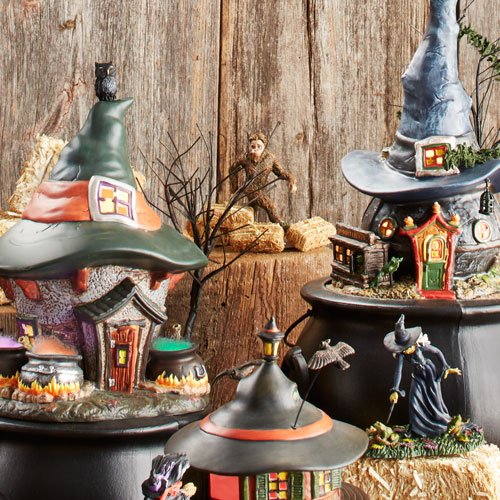 Stories of a very large and hairy creature with ape-like facial features that appears to be half man and half ape have existed in various parts of the world for centuries. In the Himalayas, it’s he is called “Yeti.” In Canada, he is known as “Sasquatch” which is the translation of a word meaning “wild man” used by indigenous natives of Northwestern Canada. And in the northwest United States, we commonly call him “Bigfoot.”

“Bigfoot” is described by believers as being between six and eight feet tall with a large forehead similar to a cave man’s, and an oddly rounded head like the Lowland Gorilla. He is covered hair and has enormous feet, hence the name, and estimates are that the feet are a massive 24 inches long and eight inches wide. Some “witnesses” claim that the five-toed Bigfoot prints they saw on the ground were accompanied by claw marks indicating that the Bigfoot may have very long toenails, or claws.

Stories of a “wild man” existed among the Native Americans of the Pacific Northwest long before Europeans moved in. Versions of Bigfoot ranged from harmless giants who stole fish from fisherman’s nets, to cannibalistic monsters living on mountain peaks.
These stories varied from tribe to tribe, and even from family to family, which meant that Bigfoot had a lot of different names. In the 1920s, journalist J.W. Burns compiled the local legends for a series for a Canadian newspaper, coining the term “Sasquatch” in the process.

Since 1994 Department 56 has introduced holiday special sets designed to be sold for just one season making them very special. They are packaged to use as a gift for a new collector or, why not, for yourself! The sets compliment one or more of our Villages and often have a single theme. This year’s holiday special sets are simply irresistible because they all have to do with chocolate. We are pleased to announce that our holiday special sets for “Snow Village”, “Dickens’ Village” and the “North Pole” are all chocolate related and we know that you will love them!

It’s fun to open a package that contains fudge, truffles, dark chocolates with nuts or caramel centers! Each set features a candy shop with holiday decorations and a young child, nose pressed up against the window, wishing and hoping to find chocolate treats in his stocking on Christmas morning!

5 REASONS YOU SHOULD EAT CHOCOLATE EVERY DAY:

Chocolate as we know it today has a long and rich history. Some historians believe it dates back several thousand years.  The word can be traced to an Aztec word “xocoatl,” which referred to a bitter drink brewed from cacao beans. The Latin name for the cacao tree, Theobroma cacao, means “food of the gods.” You don’t need to have a sweet tooth to recognize the familiar names of the original family-owned companies — Cadbury, Mars and Hershey who helped to usher in a boom in the late 1800s that has yet to slow down. With more than $75 billion worldwide spent on chocolate annually, the new Village chocolate shops are a necessary and sweet part of our Village displays in 2016!