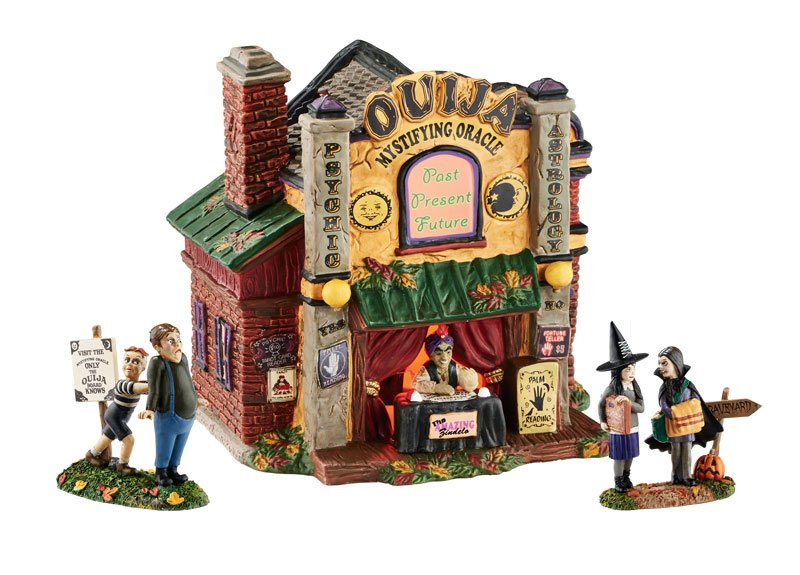 The newest lit building in the Department 56 Snow Village Halloween is “Ouija The Mystifying Oracle”. The building looks like it could be part of the circus sideshow, on a side street in the seedier side of the city, or even on the carnival circuit. It has signs advertising palm reading, astrology and fortune telling. Even the “Amazing Zindelo” who sits in the entrance works the Ouija board to tell passersby what their future will hold. (each sold separately)

Want to Setup a Quick Halloween Village Display? Click the Video Below!

Ouija boards have their roots in Spiritualism, which began in the United States in the late 1840s even though there are claims that they have existed in ancient times, this is totally unfounded. The new movement was led by mediums, who claimed to be intermediaries between the living and the dead. They were also called Spirit Boards or Talking Boards. Players would put their fingers lightly on the heart-shaped piece called the planchette that mysteriously moved about the board to “talk” or spell out words that the spirits from beyond were trying to convey.

The first patent for the game was issued to Elijah Bond in 1890 whose company produced the game for 10 years. An employee, William Fuld, took over production in 1901 and reinvented the whole concept.Fuld claimed he learned the name “Ouija” from using the board and that it was an ancient Egyptian word meaning “good luck.” When Fuld took over production he popularized the more widely accepted etymology: that the name came from a combination of the French and German words for “yes”.

That first lady, Mary Todd Lincoln held séances in the White House following the death of her son, Willie in 1862. It is thought that President Abraham Lincoln participated in some of these meetings. It is not known if they were ever able to contact Willie, and even less is known about what the president thought of spiritualism. Mary, however, was a firm believer.

The board’s success when it first was used, and now more than 120 years later shows that it has tapped into a weird place in American pop culture. It was marketed as both mystical oracle and as family entertainment, fun with an element of other-worldly excitement. The Ouija board appealed to people from across a wide spectrum of ages, professions, and education— because the Ouija board offered a fun way for people to believe in something. Researcher and Ouija historian Robert Mursch tells us “People want to believe. The need to believe that something else is out there is powerful,” he says. “This thing is one of those things that allows them to express that belief.”

And we predict that the new “Ouija:The Mystifying Oracle” will magically find a place in your Halloween Village display in 2016.

HASBRO and its logo OUIJA are trademarks of Hasbro used with permission. © 2016 Hasbro. All Rights Reserved.